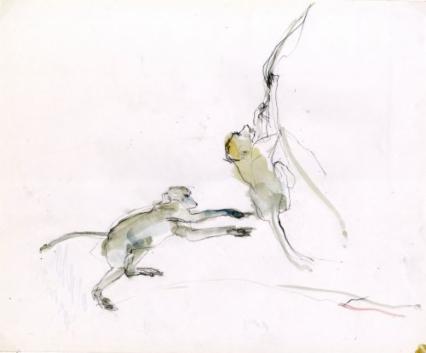 In the 1970’s scientists didn’t believe that animals had “minds.”

Information about the baboons we've studied helped to change their perspective.

What do you think? 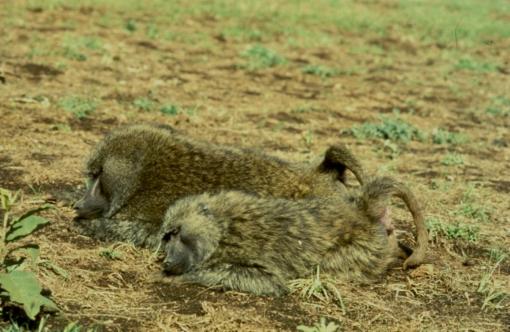 Frieda was just middle ranking.  That means there were as many females above and below her in the dominance hierarchy.  She kept her distance from the more dominant and easily approached the subordinates. But her life was really more about family and friends than about rank.  She needed grooming partners and baboons to come to her defense when she got into trouble.  Frieda’s life was pretty predictable except for the new adult male, Strider. One day he just appeared as if out of nowhere. She didn’t recognize him from the other troops that they often met and because she didn’t know him, she couldn’t be sure what he would do.  This made her nervous. She tried to avoid him.  One day he suddenly he appeared out of a thicket of bush. Frightened, Frieda’s response was immediate: her short tail pointed skyward but she didn’t scream.  Then she did the most amazing thing.  Frieda reached around, grabbed her tail and pulled it down as if she didn’t want Strider to know she was afraid of him.  Then she walked off.  He didn’t follow.  Months later, they became friends. 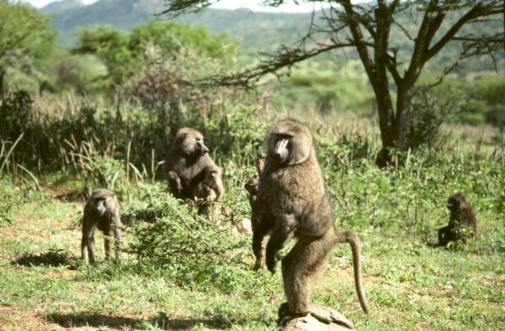 Male baboons grow up having the dominance rank of their family.  The challenge is how to change the situation when an adolescent male gets to be larger than his mother and than all females in the group (adult males weigh about 22 kilos while adult females weight about 14).  Sherlock was just at that point.  A common technique of self promotion was to pick a female who outranks your mother and then harass her until she finally submits.  Other females just fall into line after that (based on something about the female psyche that we still don’t understand).   Sherlock chose Olive, above his mother’s rank but not too much.  He spent the morning approaching her closely, increasing his threats from flashes of eyelids to full mouth yawns, to slapping the ground as if to emphasize his point.  Olive ignored him probably relying on her past experience of Sherlock being a pesky juvenile from a lower ranking family but certainly no threat.  Finally he lunged at her.  That got her attention.  Perhaps only now did she see that he really was bigger, big enough to be a threat.  She backed off.  He lunged forward again and again.  Finally Olive screamed, looking around for help.  No one was near and apparently no one had heard her either.  When Olive gave up, she made Sherlock the winner. He was now dominant to her and the rest of the baboons.  But that wasn’t the end of it. Later that day, Olive was feeding near her big brother.  She noticed Sherlock was close. Without any provocation Olive suddenly let out an ear-piercing scream.  Her brother looked up, thought Sherlock was the cause of her distress and lunged then chased him to the far side of the group.  That didn’t change Olive’s rank but it did seem that she got even. 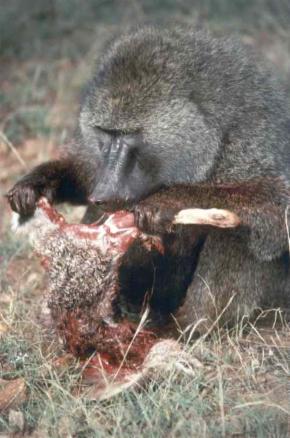 Baboons are usually accidental predators.  They “collect” what they can. Because they have color vision, prey tactics to avoid being eaten, like staying very still in the tall grass, just don’t work with baboons.  Baboons have a taste for meat but they are limited by what they can find.  Radcliffe, a middle aged adult male, discovered he could increase his luck by stalking a herd of Thomson gazelles rather than hoping to find a baby crouching in the grass.  He left the rest of the troop and wasn’t seen for a few hours.  On his return his front was covered in fresh blood but he had no visible signs of injury. This only had to happen a few times before the other males became alert to Rad’s movements. Following him out they accidentally got involved in his chase of a baby gazelle.  The relay was a success.  The males didn’t actively share the meat but each got something as they displaced each other in domino fashion with the owner of the carcass dropping scraps at each feeding site. The next time Radcliffe left, the males followed.  Relay chases became the norm increasing chance of successful captures.  But when Rad joined an adjacent troop, the remaining males didn’t try to hunt on their own.  Surprisingly, Rad didn’t continue his hunting ways in the new group he had joined.  Perhaps the series of successful hunts had alerted the gazelles to the baboon menace making it harder for baboons to get close enough to begin a chase.

Solving situations of human-wildlife conflict is difficult when baboon motivation and brains are pitted against humans.  A simple ditch or a one strand electric fence will stop an elephant from destroying a farmer’s field.  There is yet to be a fence that can keep baboons out. 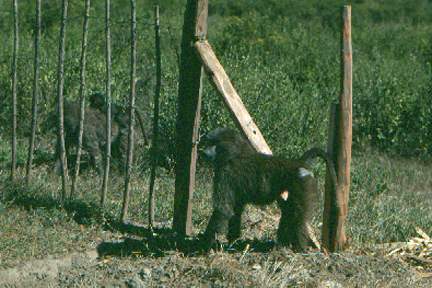 In the early days of human settlement in the baboons’ home range on Kekopey, the research project tested a variety of ways to control their raiding behavior.  One was to have a line of people between the baboons and the most settled area.  The topography helped because the smallhold farms were on a plateau above a rocky fault line that provided the sleeping sites for the baboons.  Thus if we could keep the baboons from ascending and hold the line, they would be forced to forage on natural foods not the struggling crops.  “If”.  Certain males would look like they were moving away but using the various thickets would detour around to sneak behind the line and to the farms.  The next tactic was to guard each farm.  Here too, the baboons won.  They would wait at a distance until the guard took the inevitable “tea” or “pee” break using that opportunity to dash in and wreck havoc.  Guarding does work but you need constant vigilance of many people to keep the baboons out. 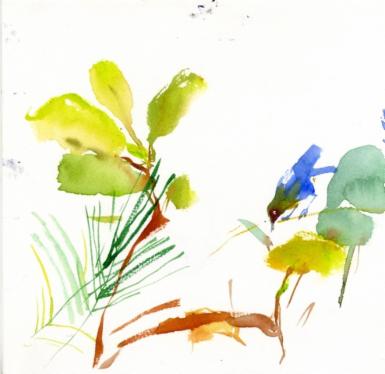 There is the story of a tennis court built behind a resort at the Kenya coast.  The court was surrounded by fruiting trees that were a favorite of the baboons.  To keep the baboons out, the manager built a high multi-strand electric fence to the best design.  But the problem was letting the clients in.  They had to install a switch that could temporarily stop the electricity to let people in to play.  The baboons never learned to turn the switch. They simply waited until people came, hopped over the now dead fence, fed until the game was finished and hopped back out when the people left.